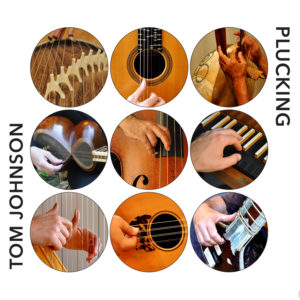 American Minimalist composer Tom Johnson has collected a global village of ethnic pluckery to perform his latest composition PLUCKING for nine different plucked instruments (2015). Persian tar, African kora, Indian sitar, Arabic oud, and Japanese koto—along with Western bass, guitar, harp & harpsichord—create a glittering masterpiece of interlocking timbres and patterns, after each instrument performs one of his famed Rational Melodies in pure intonation. Grammy nominated Tom Peters succeeds at Failing: a very difficult piece for solo bass, but eventually fails the ultimate challenge of Doublings for Double Bass (it’s OK, he is supposed to: and he lasted longer than anyone else!).

“Just Strings performs with such elegance and élan as to put one’s reservations quite beyond the pale…A delight, a treat, and, for those who care, an education (or a basis for debate).”- Fanfare