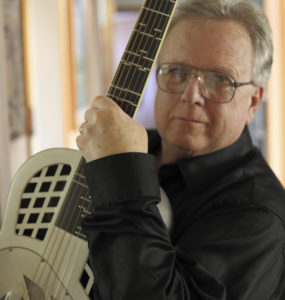 a cycle of songs for tenor & just-intonated resonator guitar

Grammy Award nominated composer/singer/guitarist GARRY EISTER brings us a delightful post-modern gloss on the time-honored genre of “Folk Music.” Taking the conventions of courtship songs, prisoner laments, lullabies, and adventures-at-sea to a new level, the set closes with an extraordinary ballad taken from the autobiography of the Irish immigrant who became “The Most Dangerous Woman in America,” labor leader Mother Jones. Eister accompanies himself on a most unusual instrument, too – a metal resonator guitar refretted to pure intervals of Just Intonation that produces melodies & harmonies not possible on the standard version. Futuristic folk music? Only time will tell!

“His voice is polished and beautifully controlled. His guitar work complements the lyrics, and he shows perfect restraint in his accompaniment, so that his playing supports the overall feeling of each piece — a wonderful balance of simplicity and skill. His abilities as a lyricist are on full display. Some of the pieces made me laugh out loud; others were heart-rending in their brutal clarity.” –M.C. Glaviano