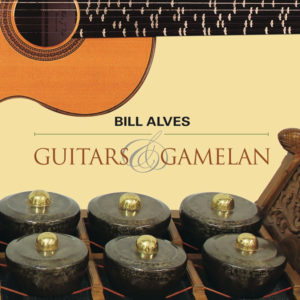 “Angin Listrik is “electrical storm” in the Indonesian language. It was commissioned by the University of California Santa Cruz Gamelan Dharma Kanti, an orchestra of bronze instruments known as a Gamelan Semar Pegulingan, an old type of gamelan from the island of Bali. This type of gamelan is named for the god of love because of its function accompanying romantic evenings in the old Balinese courts. Angin Listrik borrows from traditional Balinese practice intricate interlocking patterns, both between instruments of the gamelan and the two electric guitars, and the asymmetrical 5+3 rhythmic background found in the repertory of old-style gamelan such as this one. Unlike the more modern forms of Balinese gamelan, it has seven tones per octave, and the strings of the guitars have been retuned to match the pitches of the gamelan. Angin Listrik premiered on the 2010 Pacific Rim Music Festival.

The title Rational Basis comes from the fact that its pitches are based on ratios, that is, integer proportions of frequencies between the different guitar strings. This type of tuning, called just intonation, cannot be found on the standard frets of the guitar (except for the octaves). Therefore, in this piece, the players play only open strings, octaves, and natural harmonics. However, the strings are retuned so that, when the different parts interlock with one another, they produce the melodies and patterns you hear. An exception is the slide guitar, which can play all these pitches between the standard frets. Influence of the gamelan shows up not only in the interlocking techniques but also in the scales used, which often resemble the Indonesian scale known as slendro. This piece was inspired by and composed for the awesome Los Angeles Electric 8.

This concerto, written for guitarist John Schneider, takes advantage of Schneider’s guitar built by Walter Vogt. On this instrument, Vogt built an invention he called a Fret-Mobile system, which allows the frets to be individually adjusted under each string by means of a track along which they slide. In this work they are adjusted to match the pitches of the HMC American Gamelan, a collection of metallophones and gongs from central Java, Indonesia, similar in some ways to those of the Balinese gamelan on track 1, but quite distinct in sound. The “American” of the title refers to the fact that we play new American works such as this one, works respecting the accumulated wisdom found in many techniques of Indonesian practice but also descended from traditions of the West, North America, and California.

This piece applies the a scale based on the 3rd and 7th harmonics to an ensemble of winds, electronics, and drums. The synthesizer keyboards are retuned, as are the open strings of the electric guitars and bass. The periodic table of the elements inspired the title.