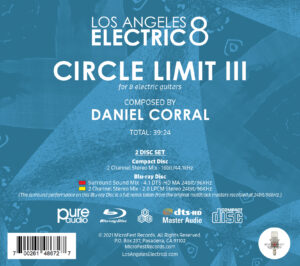 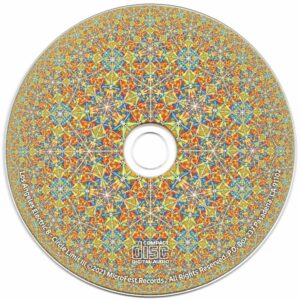 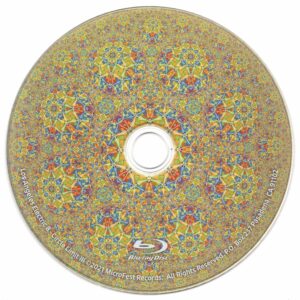 CIRCLE LIMIT III was commissioned by the Los Angeles Electric 8 (LAE8) and premiered on November 18, 2017 as part of Los Angeles Philharmonic’s “Noon to Midnight” concert marathon. LAE8 performed Circle Limit III in front of the outdoor Walt Disney Concert Hall box office on Grand Avenue, at the base of Frank Gehry’s iconic building.

When composing music for such a venue, the soundscape of the city must be considered. The soundmarks are quite different than a typical concert hall: there are cars, helicopters, buses, motorcycles, and other modes of transportation only 20 feet away; and there are people walking and/or talking who may not be interested or aware that a musical composition is being performed. In this context, audience members have a lot of choices regarding the amount of attention they devote to the piece. They could listen for the full 39 minutes, stay for 1 minute, or even walk by without stopping at all. I wanted Circle Limit III to respond to these conditions, coexisting with or even assimilating the sounds of the city and its people. It should be loud enough not to drown in the urban din, and it should reward multiple levels of engagement in terms of time spent, conceptual understanding, and aesthetic immediacy.

While M.C. Escher’s Circle Limit III woodcut was the initial inspiration for this piece, the functional priorities mentioned above pulled my Circle Limit III away from Escher’s non-Euclidean geometry and toward Brian Eno’s idea of composition as gardening – planting seeds and seeing how they grow. The score for Circle Limit III guides the players through a collection of set structures, while the specifics of what they play within those structures are left to the players’ discretion. Each “measure” is approximately 30 seconds long, and every player has a stopwatch in view. Within each measure, players are given a collection of possible musical gestures to choose from as they like.

THERE ARE 4 TYPES OF NOTATED GESTURES IN THE SCORE FOR CIRCLE LIMIT III:

I LOOPED ARPEGGIOS: These can be played at any tempo, as long as it doesn’t match another player’s tempo. Players can gradually speed up or slow down to avoid matching the tempo of another player.

II SLIDES: Players use a guitar slide to glissando between two given pitches. The duration of each slide is left to the player’s discretion, as is the direction of the slide (up or down).

III  SINGLE NOTES/CHORDS: These are to be played once and sustained.

IV  FULL NECK SLIDES: The guitarist plays a six-string chord and uses the slide to glissando up the full length of the guitar neck.

The specific timing and order of musical gestures within each measure are independently decided by each player. For an effective performance, players need to be able to respond to and anticipate other players’ gestures, so that they place their notes in the spaces left by others as much as possible. The arch form of Circle Limit III is divided into 14 sections, with most sections lasting approximately 3 minutes. Each section has a distinct voicing and combination of gesture types, which gradually morph into the following section. The first section is in the key of E Lydian, and the tonal center of each subsequent section moves around a circle of fourths until it lands again in E major at the end of the piece. This quartal movement through the dominant visual metaphor of western functional harmony is the most obvious conceptual linkage to the underlying geometry in Escher’s original woodcut.

Microtonality enters Circle Limit III in various forms, most prominently in the guitar slide glissandi that permeate the piece. There are also several incarnations of just intonation, starting with the natural harmonics that begin around 8:00. Two other sections invoke the voicing of a harmonic series: around 28:30, and from 36:00 until the end of the piece. 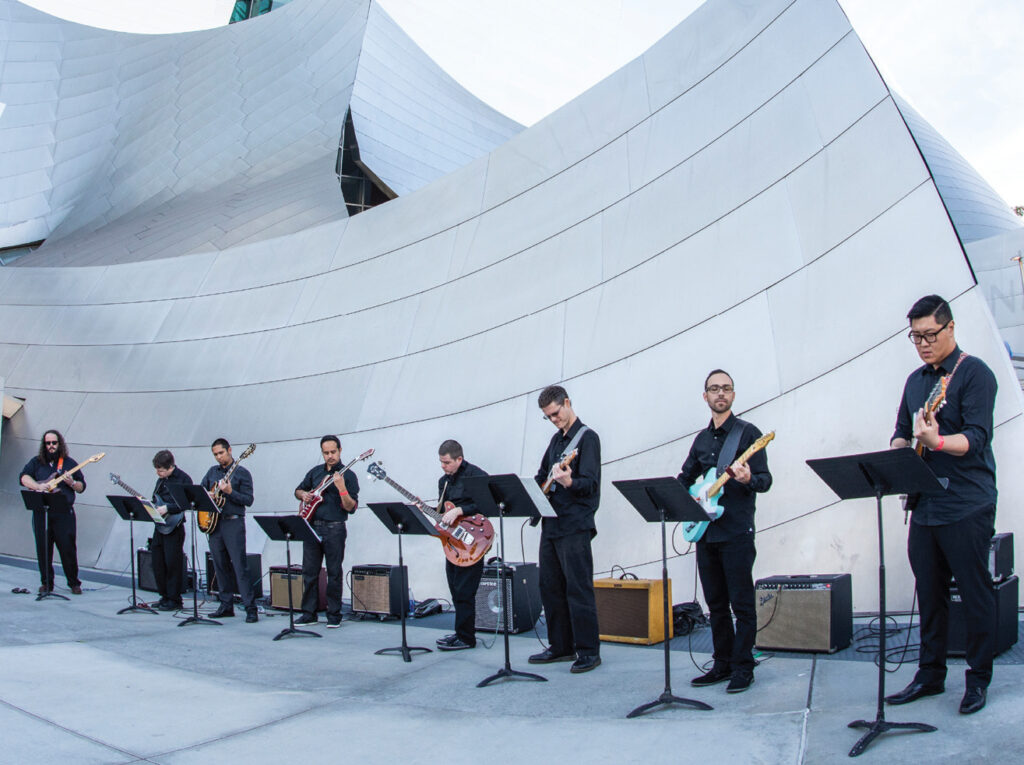 Los Angeles Electric 8 is a group of eight electric guitarists dedicated to revitalizing chamber music for a new generation of listeners. Celebrating 15 years.

Daniel Corral is an LA-based composer-performer born and raised in Alaska. His work has been commissioned and presented around the world and released by multiple labels. Past residencies include APPEX, Marin Headlands, I-Park, Banff, and Djerassi. Corral taught at CalArts 2016-2020 and was a City of LA 2019-2020 “Cultural Trailblazer.”

This recording was made with a Neumann KU-100 aka “FRITZ”.