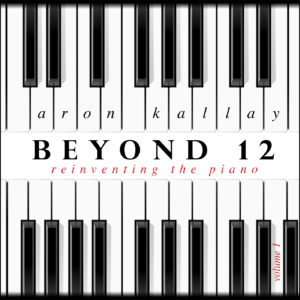 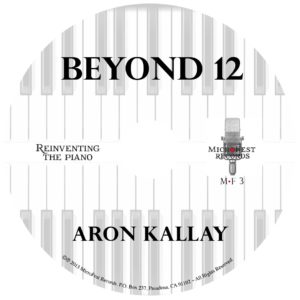 Pianist Aron Kallay’s playing has been called “exquisite…every sound sounded considered, alive, worthy of our wonder” (LA Times) and “imaginative” (Huffington Post). “Perhaps Los Angeles’ most versatile keyboardist” (LaOpus), Aron has been praised as possessing “that special blend of intellect, emotion, and overt physicality that makes even the thorniest scores simply leap from the page into the listeners laps” (KPFK). After Aron premiered three of his works, composer and music critic Kyle Gann was “struck speechless,” adding, “he did a beautiful job and made me all impressed with my music all over again… he makes me want to write more” (PostClassic).

Aron is an award-winning solo and chamber musician who has performed throughout the United States and abroad. His performances have been heard internationally on the radio shows Music From Carnegie Mellon,The Global Village, and Classical Fiasco. He has also been broadcast live over the internet from the Kennedy Center and the California Institute of the Arts. Aron is a champion of contemporary composers, microtonal music, and music that combines electronics with acoustic instruments. He is dedicated to expanding the repertoire by commissioning new works that challenge the idea of what it means to be a pianist in the 21st century. He has appeared on numerous new music festivals and concert series, including Other Minds, Hear Now, MicroFest, Jacaranda, What’s Next, and In Frequency.

As a composer, Aron focuses on works for the beginning and intermediate pianist, as well as concert works involving electronics alone and electronics with acoustic instruments. Aron also believes in interdisciplinary creative work. He is a core member of Catalysis Projects, a collective of musicians, writers, artists, dancers, and choreographers. Aron is also the co-director and co-founder of People Inside Electronics (PiE), a concert series that features new and classic electro-acoustic music, and the managing-director of MicroFest.

Aron received his Doctorate of Music Arts from the University of Southern California, where he studied piano with Daniel Pollack. Currently, Aron divides his time between practicing, performing, composing, writing about music theory and piano pedagogy, teaching, curating concerts in Los Angeles, and hanging out with his wife and baby daughter. He is on the faculties of the University of Southern California and Chapman University where he teaches piano, electro-acoustic media, and music technology. Learn more about him at his website: www.aronkallay.com.

Echoes of Nothing is a piece for virtual retuned piano with 30 pitches to the octave. The title is a quote from John Cage’s book Silence. The two movements, Nothing and Something, use the same tuning. “Nothing” is about gentle emptiness; “Something” is kind of a fast piano blues that regroups the first movement’s chord progressions into more rhythmically familiar configurations. This “Something” is truly an echo of “Nothing.” I thank pianist Aron Kallay for commissioning the work. –Kyle Gann

Alien Warp Etude is loosely inspired by Chopin’s Etude Op. 25 No. 1. Chopin’s work earned the nickname “Aeolian Harp” from Robert Schumann, who imagined the piece emanating from a wind-powered instrument with various scales “intermingled by the hand of the artist into all sorts of fantastic embellishments.”
In keeping with this idea of overlapping scales, the tuning of this etude borrows elements from two overtone series, separated by the one of my favorite musical intervals: the “neutral” or “androgynous” third, which falls between the major and minor third. I find this interval to be a source of great beauty, ambiguity and tension. Similarly, the etude explores tensions between abstract, mathematical patterns and a flowing, melodic lyricism. –Isaac Schankler

Ostinato quasi Octatonica was an improvisation I did on 2011-12-09. 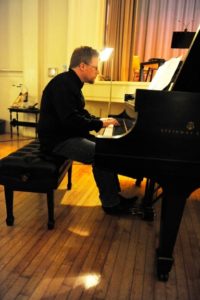 I recorded it at about 2/3 eventual performance speed (recorded MIDI allowed a later transcription, and the ability to be sped-up to knuckle-breaking speed) in an 8-note scale (hence the title) generated from a “stack” comprised of an interval very close to a frequency ratio of 13:10 (via 11\29th of an octave, to be precise). This interval has a pleasant ambiguity to it, being midway in size between a Major 3rd and a Perfect 4th. The resulting stack, when laid from low-to-high pitch, end-to-end, creates a two-step-size scale—a common feature of most traditional world scales —a property described by theorist Erv Wilson as a “Moment of Symmetry” scale (or “MOS” for short). This particular MOS tuning creates a pleasant shimmer, but is not strongly grounded in traditional tonality due to the lack of intervals resembling a perfect 5th. However, tonality ends up being perceived, thank goodness, due to repetition.
I was clearly enchanted by the changing colors of various chord voicings over the rhythmic drive of an obsessive left hand ostinato repeated note figure, which creates forward momentum via accents and a driving, obsessive rising and falling intensity. These are a by- product of dynamic and registral contrast, both in sudden plateaus and in slowly growing and declining arcs. –Aaron K. Johnson

Lament fulfilled an old aspiration to write music of several parts with tightly chromatic voice- leading and constantly developing thematic structure. It is the tale of two perfect fifths, in search of harmony, and written ‘Pythagorean’ or ‘Ditone’ intonation, which created by tuning a circle of 12 pure fifths Bb-D#. When played in that tuning, the harmonic tensions are exquisitely enhanced, since its major triads produce unusually harsh major thirds, making tonal resolution virtually impossible – except for one delicious anomaly, which closes the piece. –John Schneider

Barstow Bagatelle makes use of the tuning system devised by Harry Partch and used in the guitar part of his “Barstow.” The 19 notes per octave is a non-symmetrical subset of his 43- tone scale. Some adjacent notes are just about a “half-step” apart, in 12-tone equal tempered tuning. In other parts of the scale it may take 4 adjacent notes to span the same interval. The harmonic possibilities range from stunningly pure consonance to excruciating dissonance, and Barstow Bagatelle uses most of that range.
I am a relative newcomer to the world of microtonal composition, but I do have visceral early memories of tuning issues. Popular songs in the 50s and 60s would occasionally shift a tiny fraction of a half step, due to splicing two sessions that were recorded at different speeds, perhaps. The extraordinarily dizzying sensation of those moments made me wonder as a child whether they were deliberate key changes or accidents. Barstow Bagatelle begins with exactly that unsettling question and proceeds to explore many tonal centers, each with its own flavor.
Barstow Bagatelle is dedicated to Aron Kallay, master of the keyboard, whatever tuning system. –Tom Flaherty

Mbira (or In Cage with Adams) was composed in 2012 for the pianist Aron Kallay, the first performer of the piece. It was inspired by the subtle resonance of the traditional African percussion instrument, mbira, and by the piano music of the two great American composers, two Johns ‐ John Cage and John Adams.
The reference to the instrument mbira is in the use of limited piano range (only treble clef is used in the piece) and selected number of repeated pitches (30 pitches), based on pentatonic scales, and also in microtonal retuning of each of the pitches sounding in the piece (by 5‐35 cents).
The piece is meditative in character and uses minimalistic techniques, recycling the same pitches in different order, until it gradually comes to its natural end, like a burning candle. –Vera Ivanova

Color Variations is composed for microtonal piano, meaning that the piano is not tuned to the traditional scale we are accustomed to hearing, with its twelve equal divisions of the octave. In order to re-tune and re-map the entire piano quickly and flexibly, I am using a software-based physical modeling synthesizer (employing mathematical algorithms) to simulate the physical sound of the piano; this allows me to re-tune and re-map the entire piano quickly and flexibly.
Color Variations is comprised of 3 sections, each with a distinct tuning, and unique division of the octave; and each offering a rich new palate of intervals, frequencies, and musical colors. As a listener, you may imagine the pianist to be painting on the canvas of hearing with strokes of sonic color that burst into the moment of listening, and that dissolve into memory before the mind’s eye. –Jason Heath

All the Pretty Colours of the Rainbow
I have long been fascinated by the differences in the way humans perceive light frequencies and sound frequencies. While we are capable of hearing more than nine octaves of sound frequencies, we are only capable of seeing the equivalent of about one octave of light frequencies. Yet, even though that one octave of visible light has only six steps in it (red, orange, yellow, green, blue, violet*), we see and recognize thousands of different hues within each of those steps. Think for just a moment about how many different reds there are in the world. Now imagine that world with only one red, one yellow, one green, etc., and you get a sense of how we tend to understand sound frequencies. Although we can hear so many more octaves of sound, we like those octaves to be neatly divided into a distinct set of seven (or dare I say it, twelve) equally-spaced steps, and have little tolerance for different “hues” of those steps.
In writing All the Pretty Colours of the Rainbow, I wanted to give the listener a sense of the different “hues” that might be associated with steps in a musical scale. At its root, the pitch material is based on the five notes of a common pentatonic scale (D, E, G, A, B). However, the interval between each note is slightly wider than what we commonly hear in traditional tunings. In addition, there are four different versions of every note in the scale, each a tiny bit higher in frequency than the previous (think D, D+, D++, D+++, E, E+, etc.). The entire scale, then, requires twenty keys, or a perfect twelfth (octave + perfect fifth) on the piano keyboard to complete. And, since each repetition of the scale is slightly higher in frequency than a pure octave, an upward spiral of pitches is created to the top of the keyboard.
I also wanted to write a piece that uses a sound generally considered impossible on the piano. Because of the way the mechanism in the acoustic piano works, the keys take a bit of time to return to the up position after being pressed. This mechanical latency prevents extremely rapid repetitions on the same key. However, this tuning system puts four very-closely-tuned versions of each note next to each other, making it quite possible to produce fast repetitions and drumming patterns. –Brian Shepard