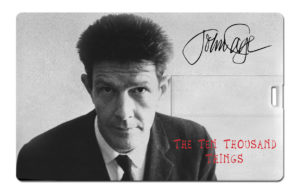 While the CD presents just one of an infinite number of possible realizations, the special I Ching Edition enables the performance of any one of the (5) solo works alone; or if one chooses, in any combination, also making possible (10) duos, (10) trios, (5) quartets, and (1) quintet. And each performance itself is recombinant, that is, the 28 sections of each composition are rearranged such that they are played back in a different order, while the spaces between the sections are also altered. That makes (31) completely different compositions, in glorious 24bit/96Khz High Resolution sound: only the solo works retain their original form – all else changes.